Welcome to the Strathnairn Action Group

The Strathnairn Action Group was formed in November 2014 as a response to the recent flood of wind farm and wind energy derivative infrastructure applications (such as larger electricity pylons, widened roads and forestry tracks) being proposed in our area. The Action Group has limited its composition to a set of eighteen volunteers so as to remain manageable, but beyond SNAG there is a much wider constituency of residents who are both supportives and partcipatory in its work.

The Group is not a vehicle of NIMBY-ism, as its membership includes those who were either supportive or neutral to earlier windfarm developments in the area. However if the following go ahead:- 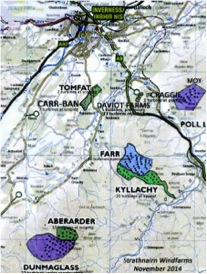 it would  increase visible turbines from  roads and residential  properties  in  Strathnairn  from  20  at  present  to  around 80,  with  the  community  being  surrounded by over 130 turbines.  Strathnairn’s  landscape  would  then  be  significantly  industrialised and degraded[1]. There is a strong feeling in the Strath that enough is enough[2].

[2] There are several frameworks, widely accepted internationally, by which ‘cultural’ impacts can be considered alongside physical and economic impacts of change. Three are briefly noted: risk-benefit analysis, the three pillars of sustainability and the four types of ecosystem services. The challenge is to compare things in different ‘currencies’ – e.g. economic vs cultural. The ES has not undertaken a fully comprehensive analysis in this respect.

SnAG response to Consultation for Planning Onshore Wind Energy in Highland.  Residents may use this information when compiling their own comments.